For my dad’s 74th birthday, I gifted my dad a trip to Scotland. This was a really special gift because my dad has only been out of the country when he was a young adult in the Marine Corp.

I knew that I was part Scottish since I was in grade school, but I never knew the details about my ancestors. I quickly became involved in my dad’s ancestral research once I started my Ph.D. at Carnegie Mellon. One thing I learned is that it is really easy to believe anything that crowd-sourced ancestry websites show (e.g., being related to a famous person). As a researcher, I was reluctant to believe such claims from these sites because they lacked validity and had no proof (i.e., documentation, records). Going to Scotland to find the physical records was our solution. So on August 14th, we got on a plane in Pittsburgh to fly to Scotland!

Road Trip of a Lifetime

The months leading up to August 14th, I chatted with my dad weekly to figure exactly what he wanted to see in Scotland and where he wanted to go to gather information about our ancestors. Places such as Isle of Lewis, Dornoch, and Dunfermline were top of the itinerary. Isle of Lewis is supposedly where the original line of the Morrison clan began. Dornoch is the closest town to Andrew Carnegie’s castle and Dunfermline is where Margaret Morrison raised Andrew Carnegie with her husband William Carnegie.

With these details, I began putting together a two-week itinerary to tour around Scotland. Starting in Edinburgh then on to Dunfermline, we covered a lot of ground in terms of research. We then took a few days off to explore St. Andrews along the North Sea and the Highlands where we saw Loch Ness, Urquhart Castle, and Inverness. After that, we headed up to Dornoch where we visited Andrew’s Castle, Skibo, for a private tour with the archivist. We continued our research on Isle of Lewis, where the original line of the Morrison clan supposedly began. Then the last few days of the trip we enjoyed some tourism on the Isle of Skye and Edinburgh.

Driving in Scotland, especially the Highlands, is an entire adventure in itself. Not only are you driving the on the other side of the road (which is very challenging), but many of the “highways” in the Highlands are very very narrow. The highways in the Highlands and Western Isles look like they are one-way, but don’t be tricked. They are two-way roads with pull-off zones so that oncoming vehicles can safely pass.

This made driving very very stressful.

Highway on Isle of Lewis and Harris. This is a two-way section of the highway, but only enough space for one car going one way. You can see a pull-off space on the left or right side of the road.

Our journey began in Edinburgh, the capital of Scotland and home to some of the country’s most iconic landmarks, including Edinburgh Castle and the Royal Mile. Edinburgh’s streets are lined with colorful buildings, many of which date back to the 16th century. We drove through the bustling streets of the Royal Mile, overflowing with people. Every turn felt like we couldn’t possibly find a smaller street. I spent the day learning how to drive on the other side of the road and exploring the castle grounds with my dad. His face was glowing with excitement as he read stories about the castle’s history. It was the perfect way to start our adventure.

The next stop was Dunfermline, a historic city in the heart of Scotland. Here, we explored the ruins of Dunfermline Abbey, a former Benedictine monastery founded in the 11th century. The abbey is home to the graves of Robert the Bruce and his wife, as well as the tomb of Saint Margaret, the former Queen of Scotland. We explored the Andrew Carnegie birthplace museum and even got a special tour from one of the guides. This stop was very important and exciting because we found the ship manifest of the S.V. Wiscasset which arrived at Ellis Island on 14th August 1848. After the birthplace museum, we spent time in the Carnegie Library researching more about our family history, looking through microfilms to find birth and marriage records. 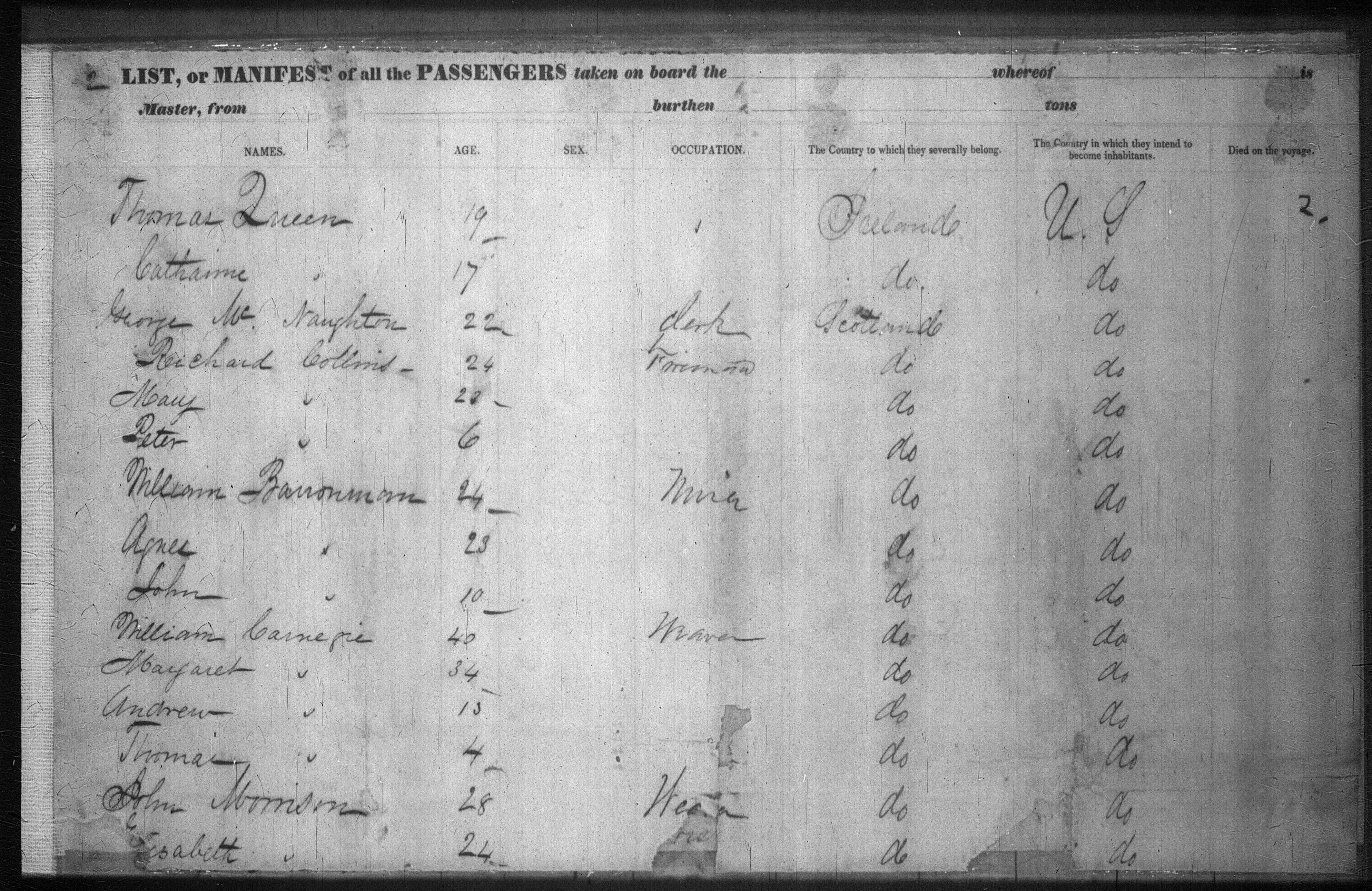 Ship manifest from the S.V. Wiscasset showing William Carnegie and Margaret Morrison Carnegie with their sons Andrew and Thomas on board. Below thomas is John and Elizabeth Morrison who traveled with their daughter Betsy and Anne.

The next stop on the tour was St. Andrews, a coastal town in the east of Scotland. This charming town is home to the famous Old Course, the world’s oldest golf course, as well as the ruins of St. Andrews Cathedral and the 12th century St. Rule’s Tower. We also took the time to walk around the ruins of St. Andrews Castle. This castle dates back to the late 15th century. I found a semi-secret passageway that runs under the castle ruins. It was very cold and narrow - I had to hunch over the whole time I was exploring it. under the We spent a lot of time exploring the town’s cobbled streets and taking in the stunning views of the North Sea. There is something for everyone in St. Andrews. We wondered the streets with excitement and awe; so many adorable shops there!

The next stop on our trip was Inverness, a city in the Scottish Highlands. Inverness is known for its stunning natural beauty, with its rugged hills, tranquil lochs, and ancient forests. After wondering the beautiful streets to find a quick breakfast, we visited the ruins of Urquhart Castle on the shores of Loch Ness. The road to get there was so narrow and many large tour buses liked to test how small our car truly was on the tiny road.

We were very lucky to be able to connect with the archivist at Skibo Castle for a private tour. We learned all about Andrew and Louise during our time at Skibo including their hobbies, passions, and values. We saw Andrew’s library, which is stocked with books back to the 1700s and his study. With Andrew’s belief that every woman deserves to be educated, Carnegie Mellon is now one of the world’s most prestigious institutions with a balanced and diverse student body. 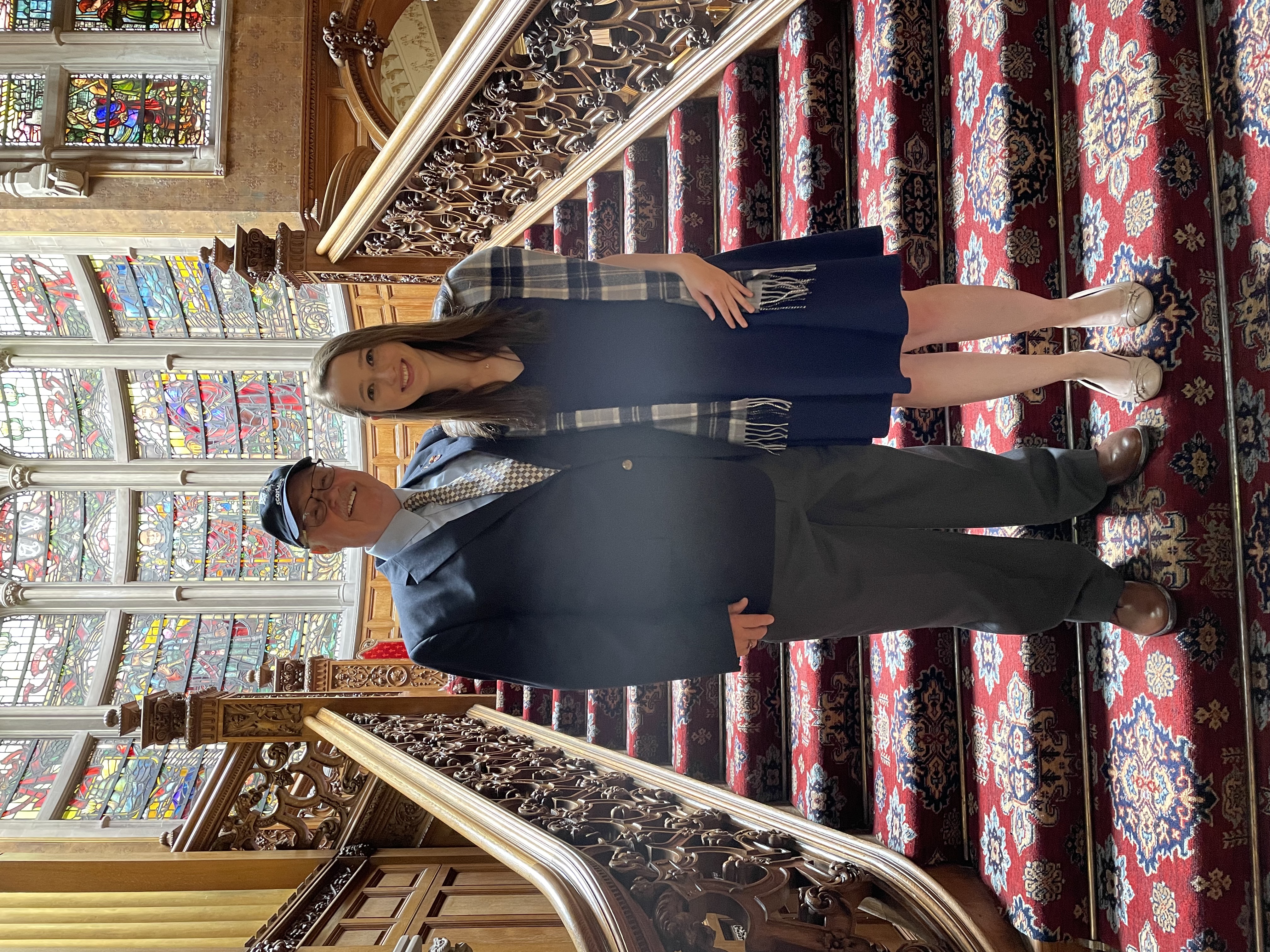 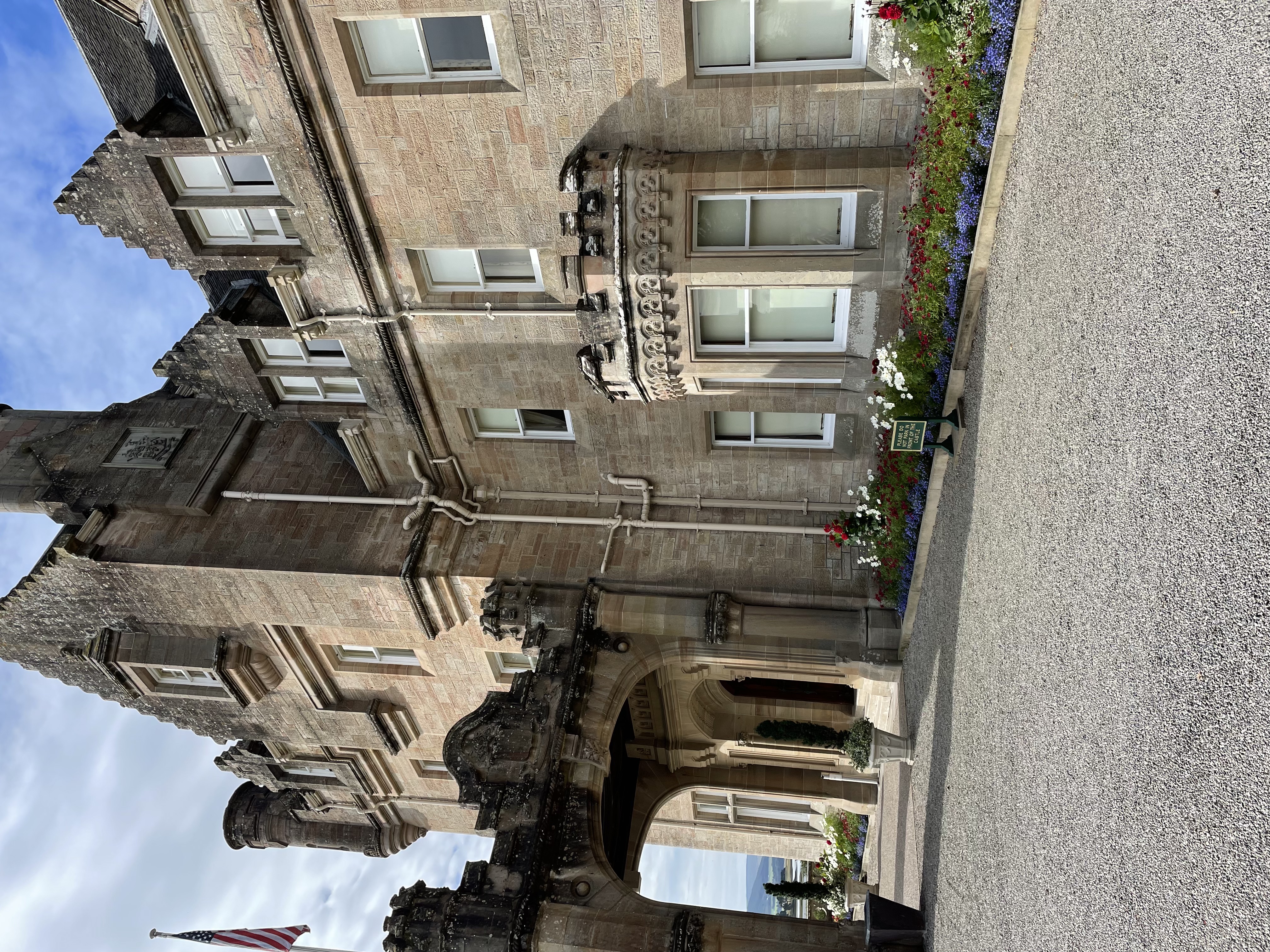 Left: My dad and I on the main, beautiful staircase in Skibo. The glass-stained window at the top of the staircase has represents the many owners of Skibo Castle throughout the centuries. The boat along the top represents Andrew's immigration across the Atlantic. Right: Outside of Skibo. You can see the United State flag flying in the top left of the picture. On the other side of the flag is the Great Britain flag. This is to represent Andrew's ties to America and Great Britain.

Ullapool to Isle of Lewis and Harris

The next part of the journey took us from Ullapool to the Isle of Lewis and Harris. The journey was a long one, but the views of the rugged coastline and the Hebridean Sea were breathtaking. We saw dolphins and whales while on the ferry, too! When we arrived to the ferry terminal at the Isle of Lewis, we were greeted by a picturesque landscape of rolling hills and a beautiful light house. Our main visit at Isle of Lewis was the Callanish Standing Stones, ancient ruins that date back to the Neolithic period.

We drove from the top of Isle of Lewis down to Isle of Harris to catch our second ferry to North Uist which connected us to our last ferry to Isle of Skye. This beautiful island is home to rugged mountains, rolling hills, and stunning lochs. We drove past this crazy landscape called the Old Man of Storr, a rocky peak with stunning views of the island. We also stopped at Kilt Rock and Mealt Falls which was absolutely stunning. After taking in the sights of the Isle of Skye, we returned to Edinburgh.

What we learned about our family ancestry

So here’s what we can confirm about our ancestors…

Thomas Morrison is Margaret Morrison’s father. John Morrison is Thomas Morrison’s brother. Following the line of John Morrison, we can lead it all the way back to me (unconfirmed). I say unconfirmed because Ancestry.com and Geni.com both have determined that Thomas and John are brothers without any official documents, and I could not find any records of Thomas and John being born nor could I find who their father and mother were (Margaret’s grandmother and grandfather). However, under the assumption that Ancestry.com and Geni.com are corroborated, we can follow John’s descendants all the way to me.

Something that was previously confusing with John was which Ann he married since Ann had spelled her name in two different ways (Humble and Humbell). John and Ann Humbell Morrison got married in Edinburgh, but belonged to a parish in Dunfermline which is why there are two marriage certificates for them (states this on the official marriage certificates).

Notion AI Assistant generated some text for some of the sections in this blog post and were edited based on my preferences.